What if aging weren’t inevitable, but a curable disease?

If this controversial idea gains acceptance, it could radically change the way we treat getting old.

Each Cyclops had a single eye because, legend has it, the mythical giants traded the other one with the god Hades in return for the ability to see into the future. But Hades tricked them: the only vision the Cyclopes were shown was the day they would die. They carried this knowledge through their lives as a burden—the unending torture of being forewarned and yet having no ability to do anything about it. 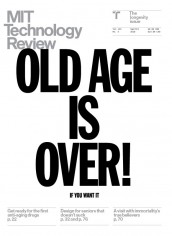 This story is part of our September/October 2019 issue

Since ancient times, aging has been viewed as simply inevitable, unstoppable, nature’s way. “Natural causes” have long been blamed for deaths among the old, even if they died of a recognized pathological condition. The medical writer Galen argued back in the second century AD that aging is a natural process.

His view, the acceptance that one can die simply of old age, has dominated ever since. We think of aging as the accumulation of all the other conditions that get more common as we get older—cancer, dementia, physical frailty. All that tells us, though, is that we’re going to sicken and die; it doesn’t give us a way to change it. We don’t have much more control over our destiny than a Cyclops.

But a growing number of scientists are questioning our basic conception of aging. What if you could challenge your death—or even prevent it altogether? What if the panoply of diseases that strike us in old age are symptoms, not causes? What would change if we classified aging itself as the disease?